Sangiovese is the unquestioned king of the red wines of central Italy, where it magnificently translates the various territorial expressions.

“Sangiovese is to Italy what Cabernet is to France: they are wines that express a viticultural and vinicultural identity of a country”. (Giacomo Tachis)

Sangiovese is the uncontested king of the red wines of central Italy, where it is practically omnipresent. In its different clonal varieties it continues to prove its unquestionable virtues, also thanks to the diverse expressions of the ‘terroir’ where it’s cultivated.

Ampelographers claim that Sangiovese’s birthplace is in the Apennines between Tuscany and Romagna, to this day the two most important regions for this red grape.

Reading a study published by farmers of the Federazione Nazionale dei Consorzi Provinciali in 1939, one learns that Sangiovese was widely planted in the Romagnan hills and that the quality was equal to the famous Tuscan wines. 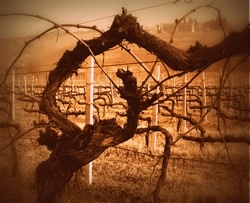 In fact, visitors to the first trade fair for local wines, held in Siena from the 3rd to the 18th of August, 1933, especially appreciated the wines made from Sangiovese di Romagna. The same study shows to what degree Sangiovese can vary and adapt to its environment.

For example, even just in the province of Forlì one can detect subtle differences between one zone and another, even when they’re neighbors (ex. Predappio, Bertinoro, Modigliana, Castrocaro, etc.)

The origins of Sangiovese are very difficult to identify; information about one of Italy’s best known and most widely cultivated grapes is very fragmentary and often unreliable. For solid information, one has to wait until the 16th century, when Soderini described it in his treatise The Cultivation of the Vine, saying “The Sangiovese (Sangiocheto or Sanioveto) grape variety is remarkable for its regular productivity”.

But it is claimed that the famous grape was already well-known more than 2000 years ago and the Etruscans used it to produce wine. Even the origins of the name are uncertain and there are numerous versions of the story. There are those who claim the name comes from San Giovanni, others who say it comes from a local dialect (from “San Giovannina”, a grape that ripens early, thanks to its early budding), and still others who swear it comes from “Sanguis Jovis”, the blood of Jove. Widely planted in Tuscany, where it takes on various names (Brunello in Montalcino, Prugnolo in Montepulciano, Morellino in the region of Grossetto, Sangioveto in Chianti), Sangiovese has found its second home in Romagna.

THE COLORS AND AROMAS OF SANGIOVESE

From ruby red to garnet, after long aging it takes on shades of orange.

Sangiovese’s aromas are primarily oriented to red and black fruits, especially black cherry, blackberry and plum. Among its floral aromas, violet is its most characteristic, followed by rose. Among these, the combination that characterises Sangiovese the most is black cherry and violet, although these are shared by other grapes.

Sangiovese is frequently aged in wooden barrels and casks, so spicy aromas of vanilla and licorice, as well as toasted notes of coffee and chocolate are common.

The intensity of these aromas depends, as always, on the producer’s use of casks or barrels. In wines produced with Sangiovese Grosso, Brunello di Montalcino and Vino Nobile di Montepulciano for example, as well as because of the longer aging before release on the market, the fruit aromas turn to jammier notes, especially black cherry, plum, and blackberry preserves.

These wines may exhibit vegetal notes, especially of tobacco, and in time even aromas of forest floor, hay, and mushrooms. After long bottle aging, both Sangiovese Grosso and Piccolo develop significant complexity where, alongside the jam aromas, those of leather develop.

One may also pick up balsamic aromas of eucalyptus and menthol, as well as aromatic herbs such as mint and thyme.